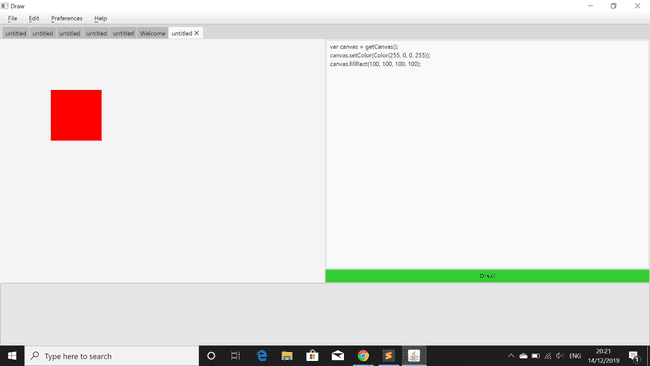 I like developing games. That means I have to work with graphics. Not just for creating the players, backgrounds, and buttons, etc, but also for putting graphics in a consistent format that is convenient to load programatically.

For example, converting from this: 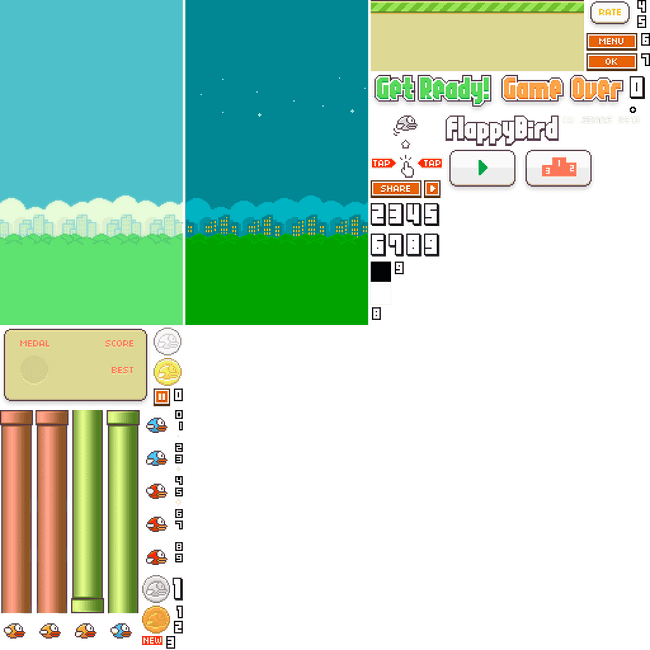 That way I don't have to hardcode the position of each frame within the game and can easily switch between them or replace the animation.

Whilst cheap assets are available online, they aren't always available or easy to find. Or cheap. And whilst there are people who can make good graphics, that can take time and you need something whilst you develop the game - programmer art.

There are two main ways I have approached creating and modifying graphics.

The first is by opening up Microsoft Paint and a lot of trial and error. This often involves a lot of repetition. To make something that can be loaded programmatically requires a lot of precision.

The second way is with code.

Java Swing, JavaFX, and HTML5 JavaScript all have a similar canvas API.

With Javascript I enter this code into the console on any browser tab.

And then, after programmatically rendering whatever it is I want on the canvas, I right click on it and save the result.

This worked fine if I wanted to create something like a chess board, but it became messy when I tried to work with images and some features required running the code on a server.

Because many of the games I made used Java (most of my earlier games used Java Swing), I would sometimes use that to get around some of these problems. I would write some code on startup to load an image, do some processing, and save it in another file. Then I would compile and execute it, and look at the final image to see if it was the result that I wanted.

Not only did this require a lot of boilerplate, but it had a longer feedback loop, and requiring me writing, saving, and executing code that I only used once.

If only there was a way for me to use code to create graphics, with minimal boilerplate, without even having to save the code, and to see the output immediately.

For a school computing project, I wanted to make an evolutionary tower defense game, when I realised that I would really like to have the aforementioned graphics language and enviroment to design the graphcs in the game. So I decided to go with that instead.

Fortunately Robert Nystrom (also known as munificent) had posted some chapters for his online book Crafting Interpreters. (Check his stuff out, it's really interesting. He also wrote the book Game Programming patters).

In this online book, he teaches how to make a programming langauge. He designed one called Lox, and made two implementations of it. The first implementation, fortunately for me, was in Java. And the second one is in C. At the time of writing, he is about 75% of the way through the second book. When I started this project, he was around 40% of the way into the first book.

The first implementation was good enough for my purposes since I only intented to write small scripts, performance was not a very high priority. Also, since it was written in Java, it is easier to integrate with JavaFX, a popular Java GUI library that includes canvas.

So I followed his tutorial, did his exercises, added some more features, made some other changes. And then I implemented the GUI.

Whilst it is not very advanced yet, I have already found it very useful.

The Lox language is syntactically similar to Javascript since it is dynamically typed and uses curly brackets, but it is more semantically similar.

In the program, I have a help/welcome page that goes through the standard library and syntax, it also provides some tutorials.

In JavaFX, Java Swing, and HTML5 canvas, you don't render directly to the canvas. You have to obtain a graphics context from a canvas and render to that.

I've always thought that using a graphics context ruined a good metaphor. In real life, we draw on canvases, not contexts. Whilst graphics context is useful for 3D rendering, that is not something I expect to support in Draw.

So I "got rid of the middle man". Under the hood, I still use context, but the user will just render to the canvas.

Some things have been changed to be more like javascript, e.g function instead of fun. This is intended to reduce the learning curve, make it easy to port to and from javascript, and seem more familiar.

Print is a function rather than a statement

I have also added a ternary operator:

and a few datastructures such as Array lists, Hashmaps, Strings, and Characters.

In addition to this, I have implemented a canvas object, a colour object, an image object, and a Math API. 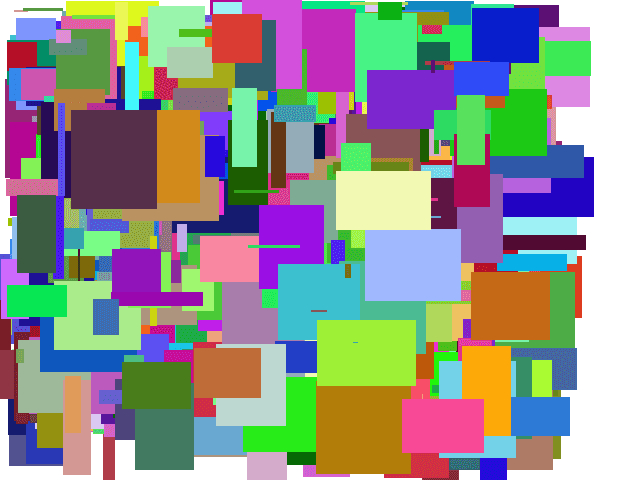 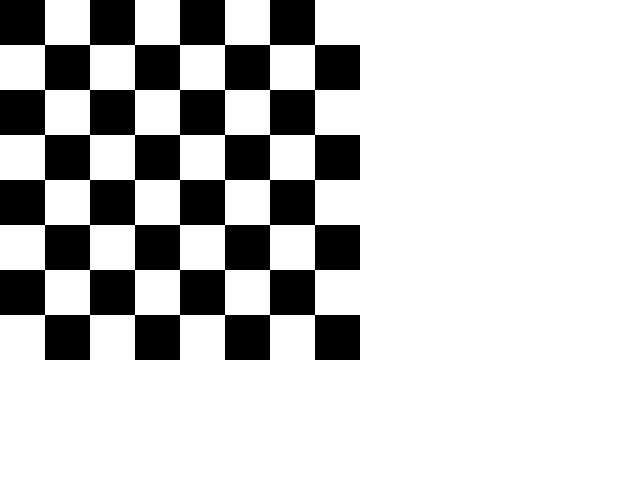 For my game Deluge, I wanted to add asteroids as obstacles. I also wanted to release my game soon, so I didn't want to wait for someone else to make it for me before releasing.

So I whipped up Draw and decided to try myself.

My initial thought is that an asteroid is sort of like a bumpier circle. A circle could be thought of as a bunch of points equally far from one point. 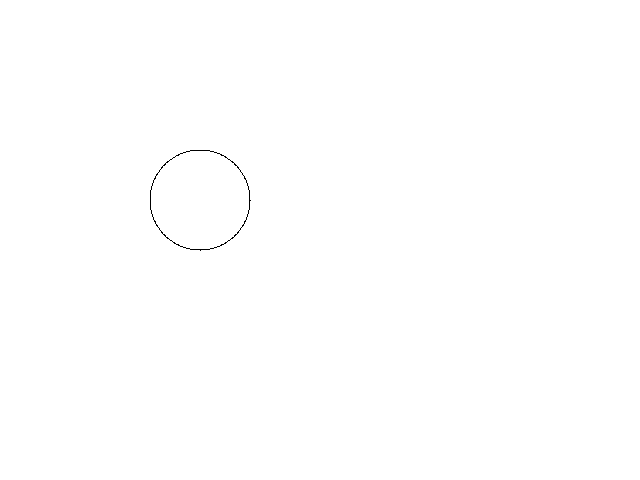 This resulted in a blurry circle, and wasn't quite what I had in mind when I said that an asteroid was like a bumpy circle. Instead of filling one pixel 360 times, I draw lines between each point. This makes it easier to modify into an asteroid - by changing the distance of the points.

To do this, instead of using filling 1 pixel rectangles, I will draw a path, using the canvas API.

I position the first point, and add lines between the points. 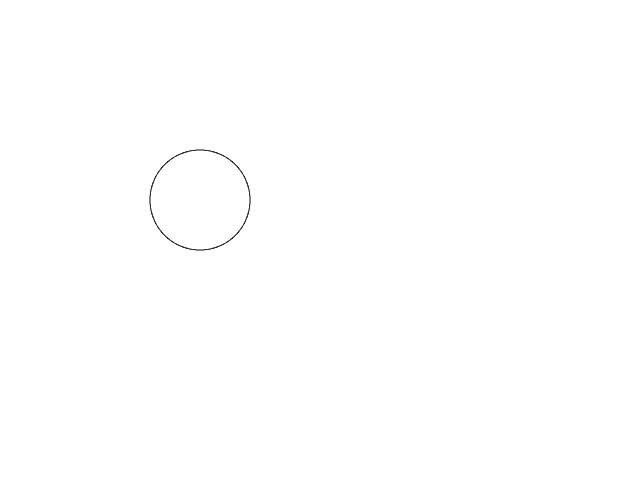 To make it less round, and more asteroid like, I will vary the distance of the points from the centre, but also keep them within a certain range. 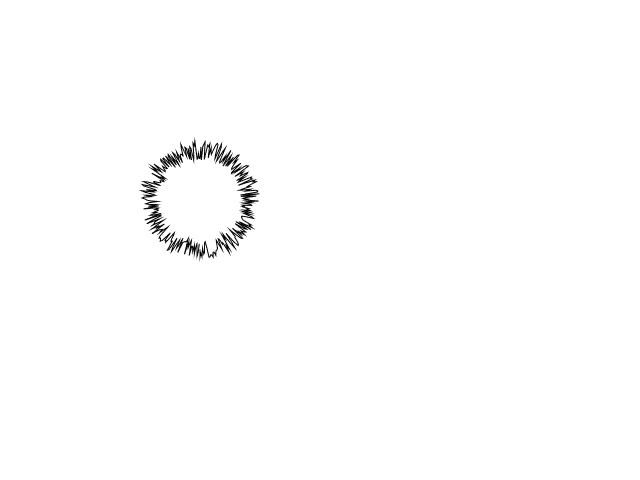 This produces a very jagged asteroid. To make it smoother, I will vary the angles from the centre, so that the lines are further apart. Because the distances from the centre have changed, I will need to close the path at the end so that the canvas automatically joins the last point to the first one. 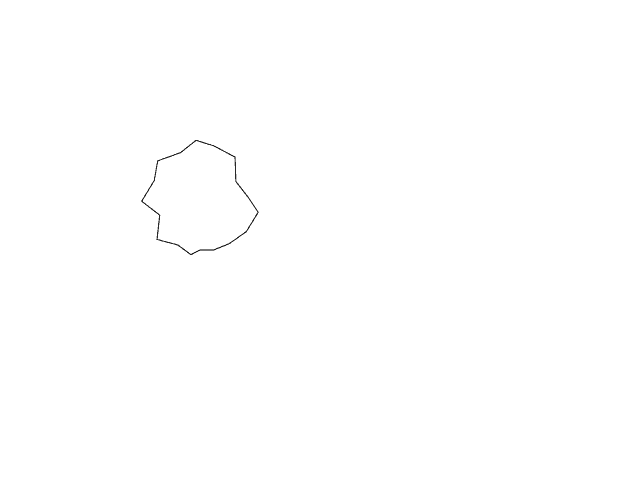 To add a finishing touch, I will make the outline thicker, and fill the asteroid with a dark brown colour. 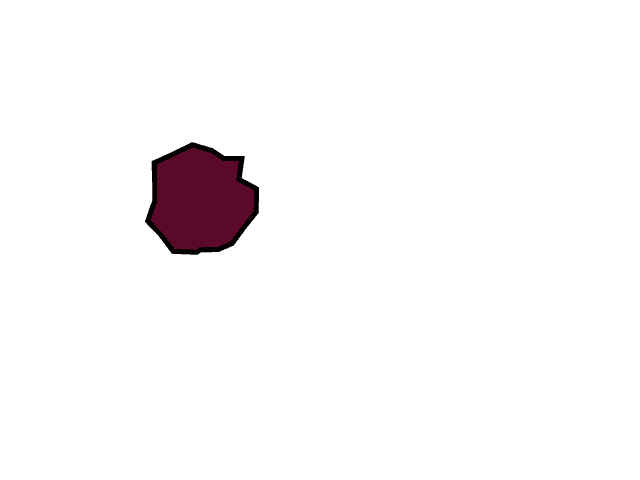 For some time, I have used this in my game:

until the graphic designer made this:

For Ludum Dare, I made Magic Real Estate. I initially started with rectangles. Then I spent some time making graphics for the players using Draw. The code is not great to look at, but it beat trying to draw by hand.

By changing a few lines, I was able to draw both wizards.

This was the final result: 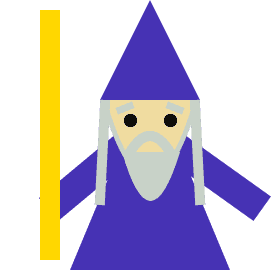 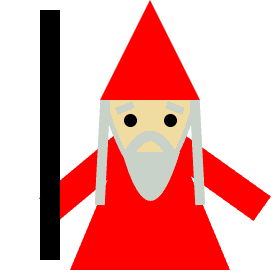 The difference was two lines of code.

I recommend writing this code block by block. Whilst this is not the best way to make such graphics (too many magic numbers and constants), using Draw made me finish this much faster than trying to do it without code, because I was able to trial and error many changes and get feedback quickly, and able to achieve a level of precision that I rarely get elsewhere. 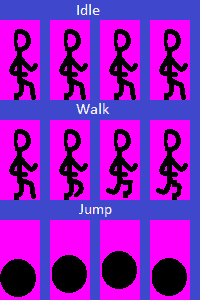 I was able to produce this: 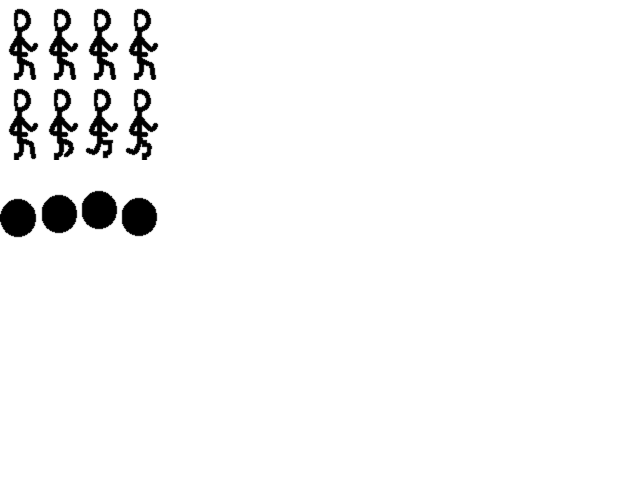 A peek under the hood

There are two make packages in this project, for the interpreter and for the GUI.

Because JavaFx can use CSS, it also has themes - but they don't look very good right now, so I stick with the default theme most of the time.

The GUI also contains support for two kinds of tabs: "draw tabs" and "help tabs". Each draw tab is bound to the interpreter. A draw tab contains a text section for the code, a console, a canvas, and a run button. When the run button is pressed, the code in the text area is interpreted, and when getCanvas() is called, the canvas in the current tab is returned. println and print also logs to the current console.

The interpeter package is responsible for executing the code. First lexical analysis takes place in "Scanner.java". The output is a list of tokens. Then an abstract syntax tree is created, this happens in "Parser.java". Then semantic analysis takes place in "Resolver.java". And finally the abstract syntax tree is traversed and executed in "Interpreter.java".

It is in "Interpreter.java" where all the global functions are defined.

This is the code for the println function:

This is the code for the clock function:

Here is one of the simplest library classes, Color:

To obtain an instance of a color within the Drawlang code, I defined a global function that looks like a constructor in "Interpreter.java"

For statements are "desugared into while statements" in the parsing stage.

This is the parser code for handling for statements:

Then the interpreter executes it as though it was a while loop.

For most cases, this works. But it means that continue statements never call the increment statement so it loops indefinitely.

Two ways I have thought of handling it are:

I am leaning towards the second solution.

Setting the current colour or line width of the canvas sets the default the next time the script is run in a tab. I would like it to start from a clean slate.

The interpreter is executed in one thread. There is no support for keyboard input or for doing something for X amount of time. I am not sure if I would like to support this, but it could allow people to quickly prototype games.

This is a handy feature in glsl.

It is possible to create cool looking effects with this. Here is an example in a game engine tutorial I followed: 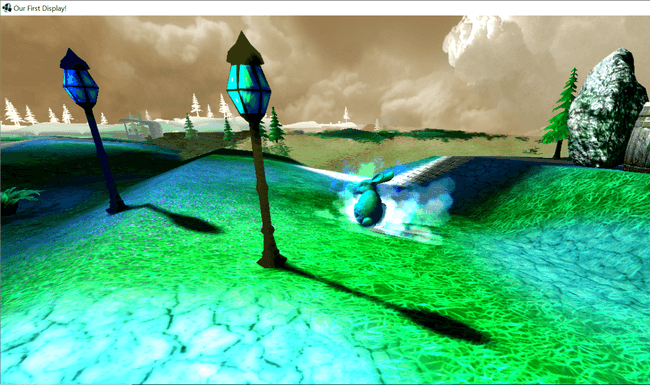 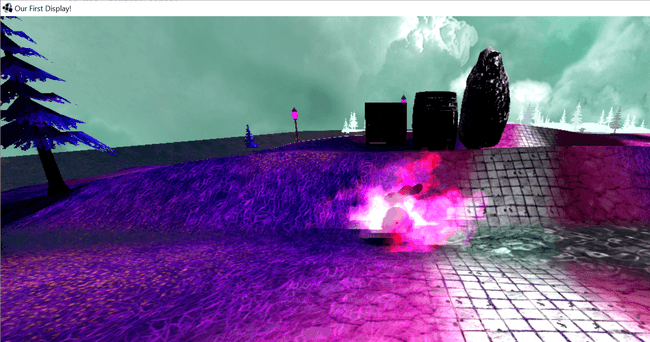 The file size of the code is often many times smaller than the file size of the output image. Not only that, but it is often possible to create images that look very different with code that is very similar by changing one parameter. One example of this is in an earlier post about biomorphs.

And this code takes 570 bytes:

Changing the parameters to this:

The first alternative that comes to mind is Processing and Processing JS.

For me, Draw has a few advantages over Processing.

This is the main reason I prefer Draw. I personally do not like their API. Maybe I am biased because I am used to using some form of Canvas API and Processing just looks wrong to me, but, for whatever reason, their API does not correspond to how I think about images so I made my own.
2. It is statically typed. I like static types, but I don't think it is a good idea for the kind of things I had in my when creating draw. I mostly intended to write small scripts and the advantages of static types are not visible in small scripts, only the disadvantages. 3. It was designed for non-programmers. From the Wikipedia page:

I made Draw for the opposite reason: I want to help people who know how to program, and think in terms of algorithms, create graphics.

Having said this, at the time of writing this, the maturity of Processing means that it is probably better for what I wrote Draw to achieve.

How to get started

The code is available here. You can download the JAR file from the classes folder.